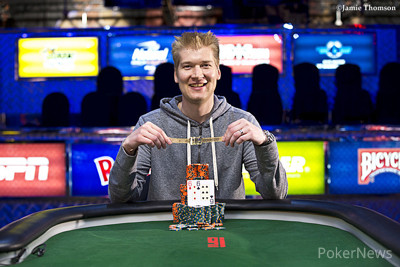 Andrew Rennhack wore a huge grin as he was mobbed by friends, family and the media moments after he won his first WSOP bracelet and secured an amazing $408,953 for first place.

Rennhack fought his way through a starting field of 1,594 entrants to return today to battle it out with the remaining 12 players, and at the end of nearly 10 more hours of poker he was the last man standing.

Play resumed on Day 3 at 1 p.m. and Christopher Symesko was the first player eliminated. He lost a big pot to Rennhack in the first hand of play when his

and a queen came on the turn. Heinz Kamutzki then eliminated Symesko moments later. Will Failla was out in 11th place and Jonas Wexler fell in 10th.

Poker pro Dan Smith was the next player to go from the official final table of nine, dashing hopes of his first WSOP bracelet. Smith was all in with

of Kamutzki and the board ran out

Eric Rappaport busted in eighth place when his

fell behind to the two pair of Reed Goodmiller who held

. It all went in on the turn and the final board read

Out in seventh place was Geremy Eiland, who ran first into the aces of Rennhack to cripple him and then the aces of Ryan Welch when he shoved his short stack in the next hand.

and was called by both Tony Gargano and Rennhack. It was Gargaro with

who would pair his ace to send Kamutzki to the rail.

and he was bested by the

of Rennhack this time. Goodmiller was the fifth placed finisher.

Welch went out in fourth when he three-bet shoved with

and ran into the

of Michael Katz. A final board of

Three handed play became a cagey affair but first Gargano asserted his authority picking up pot after pot until Katz started exerting his own pressure after Gargano lost some chips. Momentum swung back and forth and with Gargano getting low on chips he made a move on Katz three-betting him all in from the small blind with

but ran into the

of Rennhack in the big blind. The queens held on a final board of

, leaving Rennhack and Michael Katz to play heads up for the win.

Katz went into the final phase of play with a 5:2 chip lead over Rennhack but his attempt to finish him off backfired when Katz opened for 200,000, Rennhack raised to 500,000 and Katz moved all in. Rennhack called with

. The cards came out

Minutes later Katz was all in with

of Rennhack. A final board of

and it was all over for Katz who picked up the biggest cash of his career.

A terrific three days of poker ended with Andrew Rennhack a delighted and worthy winner who will no doubt be celebrating long into the night and cherishing the memories of this victory for years to come. 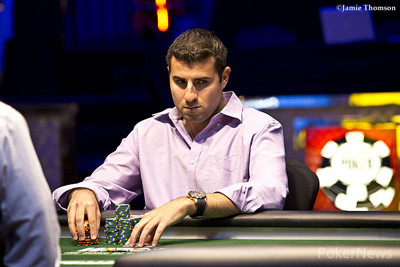 Hand #195: Michael Katz limped in and Andrew Rennhack checked his option. The flop was dealt,

Hand #196: Rennhack limped in, and Katz raised all in, Rennhack though for a moment before making the call, putting Katz’s tournament life on the line.

Rennhack was ahead and a classic race for WSOP gold was on underway. The dealer fanned out a

board and Rennhack faded a turned flush draw and any king or ten to eliminate Michael Katz in second place. 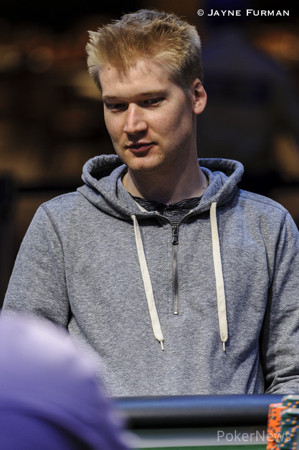 of Rennhack. The cards came out

Hand #192: A limped pot was checked down to the river on a board showing

won it for Katz.

Hand #194: Rennhack limped and the flop was

, both players checked to the turn,

flop and both players checked. The turn brought the

The players are on a break for twenty minutes.

and Katz thought for some time before betting 555,000. Rennhack called. The

fell on the river and Katz checked his cards before moving all in and taking it down.