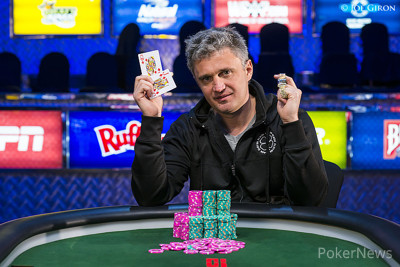 Alex Bilokur turned into a poker freight train here at Event #28: $10,000 Pot-Limit Hold'em, completely dominating heads-up play as he turned a nine-to-one chip deficit into $398,567 and his first World Series of Poker gold bracelet. Bilokur already sported a solid poker resume with nearly $3 million in tournament cashes, including taking down a PCA High Roller event in 2012. Now, the Russian has added the pinnacle of poker tournament accomplishments to that list of successes.

We began the day with 10 players, quickly saying goodbye to Dan Shak after he ran his aces into Chino Rheem's set. Rheem held the chip lead as the official final table began.

We saw short stacks Barny Boatman and Richard Lyndaker bow out soon afterward, and Pratyush Buddiga got set over set by Ismael Bojang to bust in seventh. Todd Brunson then exited in sixth when he couldn't improve an open-ended straight draw and overcards against a smaller pair.

Rheem was unable to hang onto his chip lead, bleeding off chips until busting in fourth just after Ismael Bojang took fifth. Rheem flopped top two but sent his stack over to the bottom set of Matt O'Donnell on a

flop. It looked like that was going to be the pot of the tournament, as O'Donnell had his last two opponents covered multiple times over.

When O'Donnell ousted Alexander Venovski in third, it looked like heads-up play was a mere formality as O'Donnell had just over 4.3 million to Bilokur's just under 500,000. However, Bilokur completely took over the match with a small-ball style, continually limping buttons and inducing aggression from O'Donnell when Bilokur held superior hands. After just over 100 hands, he'd claimed the championship.

Thanks for tuning in to PokerNews' coverage of another championship event here at the 2014 WSOP. 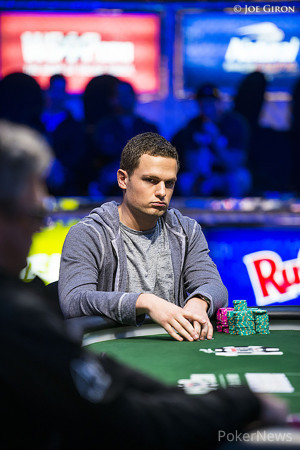 and after a Bilokur check, O'Donnell pushed in with

Bilokur made the call with

river made Bilokur a flush and the winner of the $10,000 Pot Limit Hold'em Championship.

. They checked to the

river. Bilokur showed ace-high and it was good.

Bilokur Picks Off a Three-Barrel

flop and got called. A

completed the board. Bilokur check-called 450,000, and O'Donnell had

and took the pot with his two pair.

Hand #198: O'Donnell raised on the button and won.

flop for the minimum, and Bilokur won the pot with a bet.

, Bilokur won the pot with a river bet.

board and Bilokur called. On the

river, they both checked, and Bilokur had rivered trips with

and both checked. They also checked the

flop and on the

and was checked. The turn was the

and was checked by both. The

turn brought a 75,000 bet from Bilokur that was called. The

on the river was checked down and

won the pot for O'Donnell.

and they checked. The

With that both players headed off on a 25-minute break.

Hand #181: Alex Bilokur called, and Matt O'Donnell checked. Bilokur bet 100,000 on fourth street on a board of

river, and Bilokur called. Both players held a deuce for a straight.

flop, and he took down the pot.

flop for the minimum, and O'Donnell bet 150,000 after Bilokur checked. Bilokur folded.