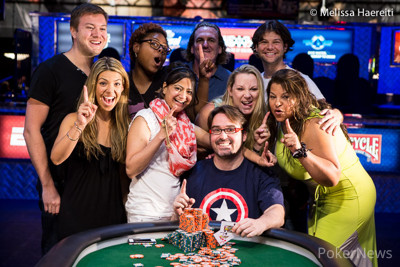 Sean Dempsey had made one other final table at the WSOP and that was last year’s $10,000 Pot Limit Omaha event. We overheard Dempsey in his winner interview say that Omaha was his primary game, but it was no-limit hold’em that he mastered over the last three and a half days.

The event started four days ago and would draw 992 entrants and create a prize pool of over $2.7 million. Dempsey quietly made his way through a field that included many big names and Day 3 runs from the likes of Matt Affleck (21st) and Dylan Linde (16th).

Late Day 3 runs came to an end at the final table for Layne Flack (7th), Nam Le (6th) and Ryan Laplante (5th). After Ryan Olisar was eliminated in 4th place early in the last level of the evening the final three battled, but ended up still three-handed at the end of the final level of the night.

The scheduled three-day event had to take to a fourth day to settle things and three players returned today to fight it out. Jacob Schindler came in holding a slight chip lead over Ryan Jaconetti, but was the first go even after his

turn was even bigger, but the

on the river counterfeited his two pair and Jaconetti had him outkicked.

Jaconetti went into heads-up play with a more-than 2:1 chip lead, but Dempsey seemed to remain patient. They would trade jabs and double ups, until the last hand when Dempsey’s pocket jacks held against the queen-ten of Jaconetti.

With the win, Dempsey will take home his second six-figure payday from the WSOP, but this one is nearly five times his previous at $548,460. In addition, Dempsey earned a nice piece of jewelry and title of “WSOP bracelet winner." 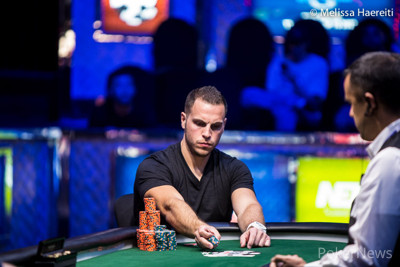 Hand #284: Ryan Jaconetti moved all in and Dempsey snap-called, tabling the

. Jaconetti would need help for his

to stay alive. The

flop gave Dempsey the set and Jaconetti the open-ended straight draw. The

turn changed nothing and the

river finished off Jaconetti and sent all of the chips to Dempsey.

Hand #281: Dempsey limped, Jaconetti checked and they saw a flop of

which was checked. The

on the turn was checked and the river

Hand #282: Jaconetti called and they saw another limped flop of

. Dempsey checked and Jaconetti checked. The turn was the

Hand #275: Sean Dempsey called and Ryan Jaconetti checked his option. The flop was

, Jaconetti checked and Dempsey bet 300,000; Dempsey called. The turn was the

fell on the river and Jaconetti bet 325,000 and Dempsey raised to 850,000. Jaconetti called, but mucked when Dempsey showed

Hand #267: Sean Dempsey moved all in and Ryan Jaconetti folded.

Hand #269: Dempsey moved all in. No call from Jaconetti.

and both players again checked. The

fell on the river, Jaconetti bet 325,000 and Dempsey folded. 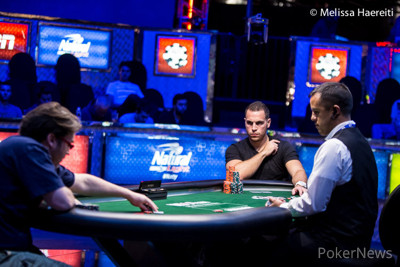 Hand #257: Sean Dempsey moved all in and got call. Dempseyu had

with the final spade giving Dempsey a flush and a double up.

Hand #260: Jaconetti limped and they saw a flop of

and Jaconetti’s rail erupted. The