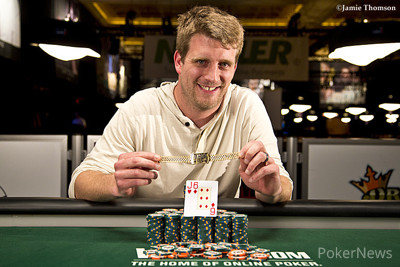 Congratulations to Mike Kachan who has come out on top of a field of 2,525 on his way to winning a WSOP gold bracelet and a huge payday of $403,483.

on a flop of

From the very first level of the tournament two days ago the action was fast and furious but as soon as the final table of nine was formed it was anything but. From then on it was the story of an extraordinary sequence of double ups as the short stacks came back from the dead time and time again, and a raise would often lead to the blinds and antes being won.

Stacks were mostly evenly distributed, and never very deep, so multi-street action was few and far between. No player wanted or could afford to make a mistake, and if they did it seemed as if a double up wasn’t that far away.

One by one though they were eventually eliminated. Ray Henson called a shove with a nut flush draw but couldn’t get there so was gone in ninth. Richard Milne fell eighth with a

shove from the button running into Egan’s small blind

. Seventh place went to Steve Gross when he picked up a losing pair of pocket fives for the second hand in a row and shoved them into Jeff Blenkarn’s tens to end his participation.

Neo Hoang was sixth when his three-bet shove with

was eventually called by the

but Jeff Blenkarn was going nowhere with his

and Skoldstedt had to be satisfied with fifth and $93,940.

was picked off by Mike Kachan with

. Egan left in fourth with $128,032 having come back from a short stack several times.

Three handed play began with fairly even stacks again but the pace picked up considerably as players seemingly opened up their ranges. A shove from Eric Shanks with a strong three handed

was unlucky to run into the

of Blenkarn who claimed another victim and sent Shanks out in third to collect his $177,527 winnings.

Heads up play would last just fourteen hands as both players refused to back down and when Kachan turned two pair in position he instantly called the shove of second place finisher Blenkarn and held on for the win. Blenkarn desperately wanted that bracelet but had to console himself with second place prize $ 250,815.

A tumultuous and gruelling three days play had finally come to an end in the early hours of Wednesday morning as a delighted Kachan celebrated with friends and basked in the attention of the media. He held up the gold bracelet as the winners photographs were taken, promising to put in on the wrist of his baby as soon as he could. 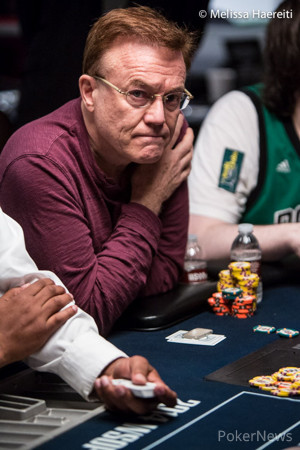 Mike Kachan opened for 250,000 and Jeff Blenkarn thought for a while before calling and checking in the dark.

and Blenkarn moved all in. Kachan couldn’t have called any quicker and the cards were turned over.

but Kachan held the

and Kachan shook the defeated Blenkarn’s hand before celebrating with his cheering rail.

of Kachan was good for the one pair on the river.

flop, Blenkarn bet 325,000 and Kachan quickly grabbed into his stack, making the call. Blenkarn checked the

Both opponents stared at each other and Blenkarn folded after about one minute of consideration.

flop, Blenkarn quickly bet 400,000 and his opponent already placed the chips for the call while it was announced.

turn was checked through and Kachan announced 395,000 only moments after the

completed the board. Blenkarn quickly called with

but that was only second best to the

While checking out the WSOP coverage here at PokerNews, why not grab a free €10 - with no deposit required - and get in on some action online?

You can try your luck with €10 in tournament tokens on Titan Poker’s amazing software absolutely for free just by creating your Titan Poker account through our links.

which was checked. The turn was the

and Kacham bet 105,000. Blenkarn considered and called. The river was the 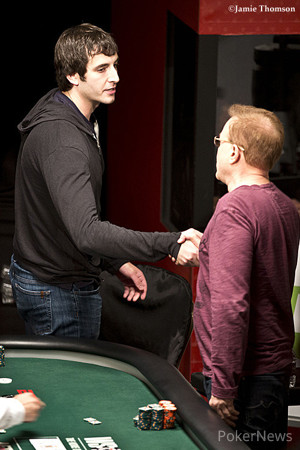 Hand #172: Eric Shanks moved all in from the button and Jeff Blenkarn did so as well, Mike Kachan quickly folded his cards.

Shanks was the player at risk and he also had the worse hand preflop. The

flop only improved his hand slightly and the

as final community card, Shanks was eliminated in 3rd place and there will be a short break to re-seat the players.