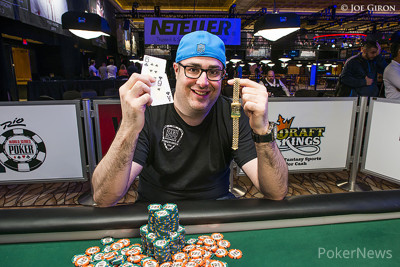 When Event #58: $1,500 Mixed-Max No-Limit Hold'em kicked off on Monday there were 1,475 runners in the room, each hoping to find themselves where Jared Jaffee sits tonight. The longtime pro finally earned his first World Series of Poker bracelet after recording 11 cashes here at the Rio since 2009, and with the accomplishment he also moved one step closer to capturing poker's "Triple Crown." Jaffee took down the World Poker Tour Jacksonville bestbet Fall Poker Scramble $3,500 No-Limit Hold'em Main Event in November of last year, but as every poker player knows, there's nothing quite like grabbing the WSOP gold.

The mixed-max format saw the field play a full first day of nine-handed action and whittle the field down to 181, and on Day 2 the tables shrunk to six-handed for another gauntlet of short-handed poker. Late on Day 2, the final 24 players reconvened at four-handed tables and the pace accelerated until just 10 remained. Jaffee topped the counts entering the third and final day of play, and he quickly went to work building on that advantage.

A crucial cooler of a hand against Brandon Cantu propelled Jaffee into the final four heads-up matches with nearly half the chips in play, as Jaffee's kings were ran down by Cantu's queens, until the river reversed the situation in cruel fashion for the combustible Cantu.

Armed with a massive chip advantage over his heads-up opponent Joseph Alban, Jaffee dispatched him in short order to secure a spot in the finals, where he would face fellow pro Mike Watson. Both players were searching for their first WSOP bracelet, and a lengthy heads-up duel ensued in which Watson fought back admirably from a nearly 2-1 disadvantage when play began. Watson picked off a bold bluff by Jaffee to briefly claim the chip lead, but Jaffee continued to apply pressure with preflop raises and post-flop aggression, winning the majority of pots during the contest.

Eventually, the tide turned in Jaffee's favor and he finished Watson off in stunning fashion, going runner-runner to make a straight and crack Watson's pocket jacks in a preflop clash.

Jaffee collected $405,428 for the first-place finish, pushing over the $2 million live earnings milestone in the process by capturing his third six-figure score in a nine-month span. He now needs only a victory on the European Poker Tour to become the latest member of the "Triple Crown" club, proving that Jaffee's name belongs among the short list of poker's rising stars. 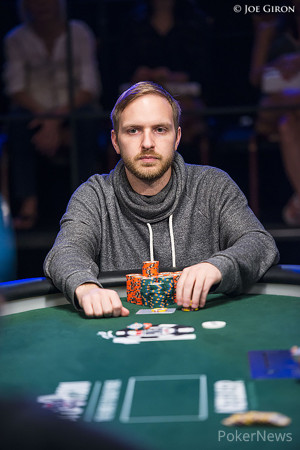 Hand #99: Mike Watson limped the button, Jared Jaffee raised to 180,000 in the big blind and Watson reraised all in for about 1.6 million. Jaffee took a deep breath and sighed before he announced a call.

"ACE!!!!!!" yelled Jaffee's rail as everyone stood up in anticipation for what was to come.

, keeping Watson well in front with his pair of jacks. Short of an ace, the

turn was as good as it gets for Jaffee as it gave him a flush draw and an open-ended straight draw. The

Hand #97: Mike Watson limped on the button, Jared Jaffee checked his option and the flop fell

turn where both checked. The

river completed the board and both checked again. Jaffee tabled

for kings and eights, besting Watson's holdings to win the pot.

Hand #98: Jared Jaffee raised to 175,000 on the button and Mike Watson called three-bet shoved for about 1.45 million from the big blind.

"It's close," said Jaffee, before he folded.

Hand #93: Mike Watson opened to 120,000 and Jared Jaffee three-bet to 290,000. Watson studied the situation for a long moment before coolly announcing himself all in for 1.6 million. Jaffee's cards were in the muck before Watson's chips were pushed forward.

. Watson checked, Jaffee fired for 165,000, and Watson smooth-called to take the

on the turn. Both players checked fourth street, as they did on the

and his busted straight draw was good for the winner.

Watson checked and Jaffee did the same, bringing the

to the table on the turn. Watson then fired out for 360,000 and Jaffee began toying with his chips before cutting out the calling chips and stacking them forward. The river card came

and Watson peered ahead into the ether, riffling a stack of chips slowly while studying the board. Finally, he tapped the table and the action moved to Jaffee, who did the same.

Jaffee took the pot down with a turned pair of aces, while Watson's straight and flush draws failed to come through on the river. 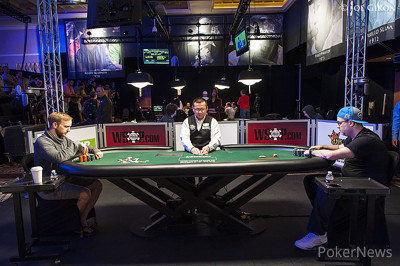 flop. Both players checked and the turn came

, prompting Watson to bet out for 150,000. Jaffee eyed the bet and sized Watson up from across the table before making the laydown.

. Watson tapped the table, Jaffee fired away for 155,000 and Watson folded.

. Both players checked, and the turn came

complete the board on the river. Jaffee fired away with a bet of 405,000 and Watson relented to send the sizable pot Jaffee's way.