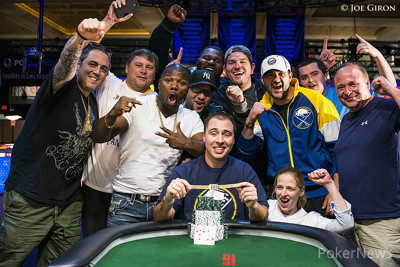 The first millionaire of the 2014 World Series of Poker 2014 has been crowned as Jonathan Dimmig emerged victorious to "bring a championship to Buffalo." In the post-tournament interview with WSOP Media Director Nolan Dalla, Dimmig admitted to having no idea what the future has in store for him. "But I hope it is a sign of good things to come and will play a few more events here at the WSOP," he said.

Dimmig's plan for Day 1 was simply to “get through” and he “had the best day of my life” on Day 2. He considered the final table as a “once in a lifetime experience” and would “never sit back and wait” just to move up in the payouts.

About a year and a half ago Dimmig quit his full-time job to take on poker after realizing that he could make more through poker even as a part time job. Since then and has played “maybe eight or nine” tournaments at the WSOP since moving to Las Vegas. Last year he finished seventh in a daily $325 deep stack after going through a huge field and was disappointed with the final result. He has nothing to be disappointed about tonight after outlasting the second largest live tournament field in poker history.

Graner lost the lead in the third hand of play on after trying to push James Duke out of a pot but the latter called with pocket kings and held up. The first player to hit the rail was Maurice Hawkins in hand #19 after getting it in preflop with

of Graner and the

on the flop immediately shut down all hopes of a double up.

of Dimmig in hand #23. Jason Johnson started the final table as shortest stack and managed to climb two payout spots before bowing out in seventh place. The fast paced action continued and shortly after, start-of-the-day chip leader Stephen Graner was eliminated in sixth place. He rivered a straight with

but Jonathan Dimmig had turned the higher straight with

and jumped into the lead.

Down to five players, more than three hours passed without elimination and it was Bradley Anderson, who took fifth place for $355,913. He flopped top pair with

in hand #94 but James Duke spiked middle set with pocket queens and the runner runner miracle never happened. The only non American on the final table, Andrew Teng, finished in fourth place after losing a flip with

Three handed play started very passive and several double ups occurred before Andrew Duke was sent to the rail in third place. He was left short stacked after previous confrontations and flopped top pair after a preflop all in with

in hand #184, but Dimmig turned the higher pair with

. Heads-Up play started with a bang in the first hand as Dimmig doubled up through Jeffrey Coburn and only five hands later the two saw the

flop. Dimmig moved all in with

and Coburn called short stacked with

river blanked and the record-breaking Millionaire Maker with stunning 7,977 entries had crowned its winner.

Welcome to the Millionaire's Boys Club 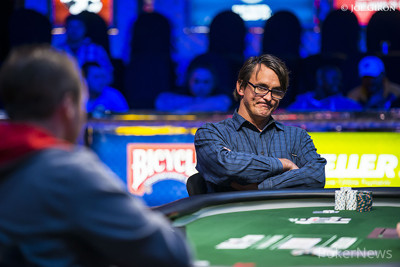 Hand #188: Jonathan Dimmig keeps up the pressure. After a checked through

flop and a bet on the

turn, he moved all in after the

river and enforced a fold from Jeffrey Coburn.

Hand #190: Coburn raised to 1.5 million and Dimmig called. They both saw the

flop and Dimmig moved all in once again. Coburn didn’t have much left and made the call!

turn was no threat either. One more card to go. And it was the

, putting an end to the tournament and generating a loud cheer from the rail of Jonathan Dimmig. “LET’S GO BUFFALO” is all she said.

Hand #186: Jeff Coburn opened for 1.25 million and Jonathan Dimmig moved all in. Coburn folded and Dimmig added to his chip lead.

Hand #187: Dimmig completed the small blind and Coburn checked his option. They both checked the

flop. They did the same on the

for a straight and took down the pot.

Hand #185: First hand of heads-up play. Jeffrey Coburn raised to 1.5 million and was called. The

flop saw the continuation bet of Coburn for 1.65 million and Jonathan Dimmig raised it up. Coburn moved all in and was called immediately:

Top two pair versus top pair and flush draw. The

turn gave some chop odds but the

was a blank and Dimmig doubled up into the lead. 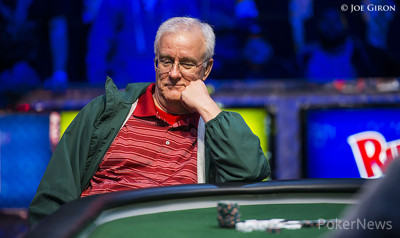 Hand #184: James Duke moved all in first to act and was called by Jonathan Dimmig. It was for a total of 3.1 million and the hands were placed face up in the middle for all to see:

and Duke was eliminated in 3rd place. Dimmig's rail let out a "let's go Buffalo" chant as he stacked the chips.

Hand #182: James Duke moved all in and took the blinds and antes.

flop that got checked through. On the

appeared on the river.

Duke was sent into the think tank and then said “I better have something there,” talking to himself and the opponent. He checked the cards again and then folded. 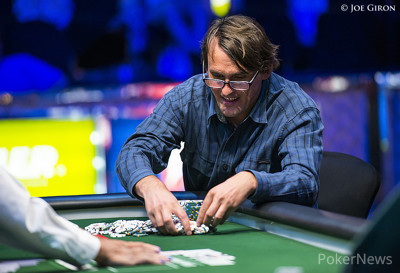 and Duke check-folded to Dimmig's bet.

Hand #180: Dimmig opened to 1 million from the button. Coburn called from the small blind and Duke joined in as well from the big blind.

and both players checked. The dealer put out the

on the river and they again checked. Duke showed

for tens and sixes. Dimmig raked in the pot.

Hand #181: Coburn opened for 1.2 million from the button. Duke called from the small blind and Dimmig also called.

and Duke checked to Coburn who placed out a 3.3 million bet. Duke moved all in and was snap-called by Coburn who held

for trip kings. Duke could only show

for aces and kings. Coburn had 5.525 million behind and with that pot assumed the chip lead for the first time all night.