The ANZPT Queenstown Main Event has been completed and that means it has a brand new champion. Step forward David Allan, the proud winner of the 2012 edition of this fantastic event.

The nine-handed final table started with David Evans and Ivan Zalac nursing a short stack and it was no real surprise to see both these players bust out early on whilst attempting to find that all-important double up.

Just 15-minutes into the finale Matt Wakeman min-raised to 12,000 from early position and Evans, two seats to his left, three-bet to 36,000. The action folded to Ken Demlakian in the hijack and he flat-called. The remaining players folded, including the initial raiser, and it was heads-up to the

flop. Evans insta-shoved and was snap-called by his sole opponent. Evans flipped over

and was in great shape against the

. The queens stayed in front when the

arrived on the turn but the

on the river won the hand for Demlakian and sent Evans to the rail.

Twenty minutes later and Zalac became a casualty and the eighth place finisher at the hands of Ricky Kroesen. Kroesen opened the betting with a raise to 12,000 only to see Zalac three-bet all-in for 61,000. Kroesen made the call, commenting that he thought he was in a coinflip but that was not the case because his

of Zalac. The final board ran out

and the final table was down to seven players.

Seven became six just 10 minutes later when Team PokerStars Pro Bryan Huang lost his stack making a play at a large pot. The blinds were now 4,000/8,000/500a and Allan opened to 16,000 under the gun. Jordan Westmorland three-bet to 39,000 forcing out everyone else who was left to act. That was until the action was on Huang in the small blind and he opted to four-bet all-in for 203,500 in total. Allan quickly passed but Westmorland beat him into the pot with a call and it soon became apparent why. Huang had made his play with

but Westmorland was armed with

. Huang was drawing dead by the turn of a board that read

and arguably the most dangerous player at the final table was eliminated.

After that flurry of activity it took a further hour-and-a-half of play until the next player headed to the rail; via the cashier's desk of course! Everyone folded to Wakeman in the cutoff and he moved all-in for a shade over 130,000 chips with what turned out to be

. Usually this would stand a good chance of winning the much-needed blinds and antes but not on this occasion. This time around Westmorland woke up with pocket sixes and made the call. Westmorland's call was rewarded with a third six appearing on the

flop and when the turn and river were the

respectively it was game over for Wakeman.

Westmorland's new found knack of finding big hands when they were most needed continued with David Zhao's exit. Over two hours had passed since Wakeman's untimely demise when a short-stacked Zhao put his stack into the middle of the felt holding

. Westmorland woke up with

and Zhao was drawing to two outs. They failed to appear as the board read

by the river and Zhao became the fifth place finisher.

Kroesen was the next player to fall victim to Westmorland's run-good. Kroesen looked down at

and when the action passed around to him on the button he moved in for 270,000 chips. Westmorland peeled his cards back to reveal

and he called faster than Road Runner can sprint! Kroesen caught a ten on the

flop but failed to improve further by the river and the tournament became three-handed.

It stayed this way for over 90-minutes until Westmorland became the third placed finisher. He was first to act, in the small blind, and he made it 50,000 to play. Demlakian was having none of it and he made the call. The dealer fanned out the

flop, a flop that saw Westmorland initially check but then check-raise to 175,000 when Demlakian fired a 75,000 bet. The turn was the

and now Westmorland moved all-in for 388,000 and Demlakian made the call, turning over

in the process. Westmorland could only muster

and would need to catch an four, eight or nine to stay in the tournament. The fifth and final community card was the

and with that heads-up was set.

Going into heads-up Demlakian lead Allan by 1,700,000 to 1,060,000 chips but he was soon way, way in front and it looked like the title was going to be his. However, Allan fought back valiantly and not only managed to claw himself back into contention but he actually took the lead and started to forge a lead for himself. Then, out of nowhere, the final hand took place.

It all started with Allan limping in on the button and Demlakian tap the table and check. The duo checked the arrival of the

flop but there was no such passivity when the

landed on the turn. Here Demlakian lead out for 170,000 and Allan made the call. The river was another paint card, the

“Two-pair” said Demlakian as he turned over

“Flush,” said a jubilant Allan as he revealed

The next stop of the popular ANZPT takes place between August 31 and September 3 at the amazing Crown Melbourne, the ANZPT Melbourne Grand Final. You could be playing in it by winning your seat on the world's biggest online poker site PokerStars. Download PokerStars via PokerNetwork Use the marketing code POKERNETWORK and the bonus code STARS600 to not only claim a 100% match up to $600 first deposit bonus but to be eligible for all future promotions we hold with PokerStars. 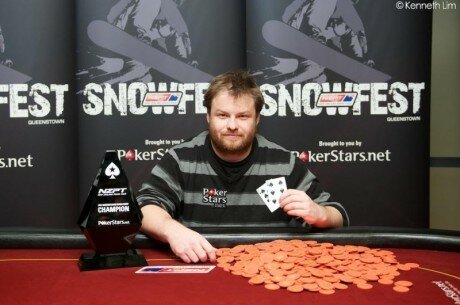