The final Day 1 of the 2012 Australia New Zealand Poker Tour (ANZPT) Queenstown Snowfest Main Event has come to a close. Today was Day 1C and another 49 players ponied up their NZ$3,000 for a seat at the SKYCITY Casino today. The final turnout for the tournament is 149 players, an increase on the 127 players who played this event last year.

There were some familiar faces at the tables today for the last chance to get involved in one of the biggest tournaments on the New Zealand calendar. PokerStars Team Pro Bryan Huang, Australian Poker Hall of Fame members Leo Boxell and Lee Nelson and PokerStars Team Online player Roy Bhasin were some of those involved today.

Bhasin, who is a Pot Limit Omaha cash game star, got off a great start when he won a pot with

which was better than his opponents

Soon after, Huang doubled up in the most cruel of situations — for his opponent anyway — as Huang's pocket aces held up against the other unfortunate soul's pocket kings to increase his stack to 34,000.

Then it was Boxell's turn to get involved with increasing his starting stack. The board read

appeared on the river and Boxell lead out with a 5,000 bet and was again called. Boxell was worried about a flush but his rivered straight, made with

, was good enough to move his stack up to 31,500. However, Boxell’s stack decrease over the day but soon before the end he managed to get a late double up to survive the day when he got his pocket aces in pre flop against pocket tens to finish the day with 21,300.

Bryan Huang (39,925) and Roy Bhasin (19,100) made is through to Day 2 but all are chasing the days chip leader Nurlan Boobekov who finished up with 69,200. Some of the high profile names that busted out include Lee Nelson, John Apostolidis and Jan Suchanek.

Twenty-nine players survived the day's play which when added to the 58 from the other previous two days means 87 players will return tomorrow for an uniquely structured Day 2. Half the field will play three levels of action on Day 2a at 12:30 PM with the other half playing three levels on Day 2b at 16:00. The survivors will converge at 19:00 to play another few levels. The top 15 players will earn at least a $7,050 min-cash, while the first-place prize is worth and impressive NZD$110,600.

Stay tuned to PokerNetwork for full coverage tomorrow as the players battle down to the money. 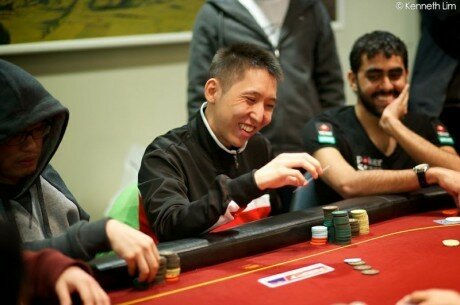