Congratulations to Australia’s David Borg on his second place finish at Event 56 at the World Series of Poker (WSOP). Borg entered the $1,500 No Limit Hold’em along with 2,797 others and by the end he came agonizingly close to snatching his first WSOP bracelet but will no doubt be consoled by the $410,517 he earned for his efforts.

Borg started the tournament well and finished up Day 1 placed 16th from a total of 305 remaining players, with 95,200 chips. Fellow Aussie, Arthur Kalantzis, had him just out chipped with 97,700 and he eventually finished the tournament in 54th place for a nice $10,388. Borg had a brilliant Day 2 and managed to bag up 923,000 chips good enough for fourth spot out of the 22 survivors.

Going into Day 3, there was still some stiff competition remaining in the field with WSOP 2008 Main Event Champion Peter Eastgate, World Poker Tour Winner Will “The Thrill” Failla and 2011 Main Event Final Tablist Sam Holden all still in the hunt. Borg eventually made it to the final table and it started very well when he called Tomas Junek’s four bet pre flop with pocket tens and went on to hit a set on the flop. They got the money in with Junek holding pocket aces and the Aussie got the double up to jump to the top of the chip counts.

Eastgate was the main focus of attention on the final table and Borg was having his own personal war with him. Eastgate doubled up through the Aussie and then gave most of the chips back when Borg managed to double through the Dane. Fittingly, the Aussie was the one to send the former World Champion to the rail in 4th place. Eastgate moved all in for his last million in chips with

and Borg snap called with

to send the Australian up to 4 million in chips.

Junek and Borg were the final two players and heads up play began with the Czech player holding over a 2:1 chip lead. With the blinds high the one on one battle didn’t last long. The final hand of the tournament saw Borg shoving with

and was called by Junek’s

. The board provided some outs and chop outs with

coming by the turn but the

river sent the bracelet to Junek.

It has been a fantastic WSOP for the Australian players but unfortunately no-one has snagged a bracelet just yet with Julian Powell (4th in Event 3), Warwick Mirzikinian (3rd in Event 6), Brendon Rubie (2nd in Event 28), Jackie Glazier (2nd in Event 41) and now David Borg all coming so close to winning one.

There are a few events left but already the next bracelet sweat is on as Tony Hachem is placed 15th in chips in the super difficult $10,000 No Limit Hold’em Six-Handed Event #57. There are 27 players remaining from the original 474 starters and a whopping $1,136,197 is up top for the winner. Hachem will have to be on top of his game to take down one of the toughest events of the year with the likes of Jason Mercier, Layne Flack, Shannon Shorr and Andrew Litchtenberger just some of the talent left in the hunt.

Do not forget you can follow all of the action from the remaining events via our live reporting pages. 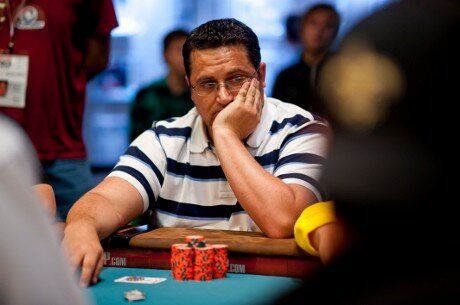