Over the past 18 months, poker pro Jason Somerville has built his own brand and a huge following through his live streaming videos on YouTube and Twitch. PokerStars took notice of the huge success, and on Friday the world's leading online poker site added Somerville to its exclusive team of sponsored players.

"Jason Somerville represents the latest generation of poker pros, raised on American poker television and videogame culture," the company said in a press release. "The young American has parlayed his poker passion into a successful Twitch feed, where fans watch his real-time play, commentary and strategic advice on the popular video platform and game community."

In association with the partnership, PokerStars announced the launch of its official Twitch channel, which will host a wide variety of entertaining and educational content, including streams from other members of Team PokerStars Pro. Somerville will be a regular contributor to the channel, beginning with the Season 3 launch of his popular Run it UP! series this Sunday, March 1 at twitch.tv/pokerstars.

PokerStars anticipates Somerville will help broaden the reach of poker to new audiences on Twitch and YouTube.

"I'm delighted to become a member of Team PokerStars and can’t wait to resume my Run It UP! series on Twitch," Somerville said. "I'll be live streaming for several hours this coming Sunday and I can’t wait to hear from, and chat to, a growing group of poker fans as the broadcasts continue."

In addition to his Run It Up series, Somerville will represent PokerStars online and at tournaments and events around the globe. In his first appearance as a PokerStars ambassador, Somerville will attend the American Poker Awards Friday evening at the SLS Hotel in Los Angeles, where his show is a finalist for Poker Media Content of the Year — against PokerNews' very own live reporting updates at the World Series of Poker.

On the felt, Somerville is a WSOP bracelet winner with more than $6 million in combined tournament winnings online and live. His largest cash came last summer at a $100,000 buy-in Super High Roller in Las Vegas where he chopped it for $1,347,352. He has also served as one of the game's foremost ambassadors, drawing comparisons to fellow Team PokerStars Pro Daniel Negreanu.

"Jason is a unique proposition – a poker pioneer who has had great success both online and live, and brings something different to the table through the way in which he has built a popular live streaming poker show," said Kirsty Thompson, Head of Pro & Celebrity Marketing at PokerStars. "I'm sure he will be a great ambassador for PokerStars, and will help to increase the level of interactivity between the brand and its players."

For more on Somerville, visit his full bio page at the PokerStars Blog. Click on the image below to visit his Run It Up! channel on Twitch. 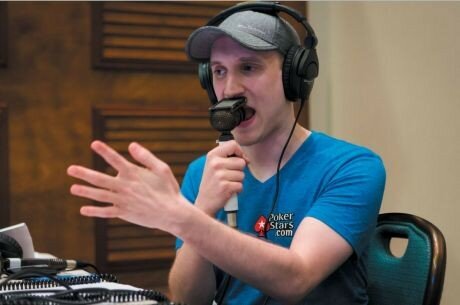