British pro Sam Trickett was on cloud nine after his second place finish in The Big One for One Drop tournament, a result that netted him over $10.1m, but he has been brought back down to Earth with a vicious bump after being jumped by six men.

The mindless thugs apparently attacked Trickett and his girlfriend, Natasha Sandhu, whilst the pair were returning to their hotel after a night of celebration with friends and family in some of Las Vegas' high profile establishments. Trickett broke the news on Twitter saying:

Samtrickett1 Sam Trickett Is this what happens if ur successful? literally beat the shit out of me and spat in @NatashaSandhu face all over nothing... July 05, 2012

As you would expect the support for Trickett and his beloved has been very strong with many requesting more information, such as whether the thugs were apprehend but so far there has been no official word from Trickett and Co. Whether this was a random attack or one based on jealousy thanks to Trickett's immense success at the felt remains to be seen but regardless of the excuse the six cowards who attacked the couple give, it should never have happened.

Thankfully it looks like - from the picture Trickett tweeted - there will be no lasting physical damage but that is not the point. Hopefully the those responsible will be caught and brought to justice in the very near future. As PokerNetwork is fed more information we will pass it onto you. 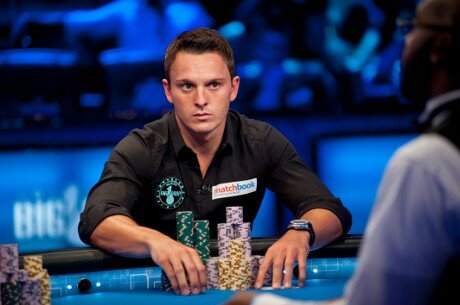 Sam Trickett in action during "The Big One"