On each of the upcoming nine days, PokerNetwork will be taking a brief look at each member of the 2013 World Series of Poker November Nine. To start things off, we'll be moving around the table in seat order beginning to the left of the dealer in Seat 1, and this year the first player up is Sylvain Loosli.

Loosli is making his first-ever WSOP cash in this year's Main Event, and it's surely a big one, but the 26-year-old poker pro from Toulon, France isn't a complete stranger to the game of poker. He began playing the game a couple of years ago after discovering it while at business school. Since then, Loosli has honed his skills online where he has amassed more than $1 million in earnings. Loosli is a regular in bigger online cash games up to $25/$50, but only has one live score to date — a 24th-place finish in a €2,000 side event at the 2011 European Poker Tour Deauville for €2,350 ($3,198).

Now while this may not sound like much of a record for Loosli, we can't forget about some of the recent WSOP Main Event champions who have shared similar stories leading into the final table. Peter Eastgate and Joe Cada, the respective 2008 and 2009 champions, were brand new faces to the poker world before they had made their deep runs in the Main Event. Both had very little live success prior to their massive victories, but were also known to do very well in the online realm. Much of the same can then be said for Jonathan Duhamel (2010), Pius Heinz (2011) and Greg Merson (2012) — all were young guys with online backgrounds and little live results that emerged as the world champion.

Loosli will enter the final table with 19.6 million in chips. That's just below average and good for sixth overall. Loosli looks like he has one of the better positions at the final table to start, with two of the shorter stacks in Michiel Brummelhuis (11.275 million) and Mark Newhouse (7.35 million) to his direct left, then Ryan Riess in Seat 4. While Riess has a larger stack of 25.875 million, he didn't play too aggressively on Day 7 that lends us to believe he'll be giving Loosli many problems at the table. Furthermore, Loosli will have good position on JC Tran (38 million) and Jay Farber (25.975 million).

If there was ever a "villain" in this year's November Nine, Loosli might be the leading contender, although there really are no bad guys this year to root against. While at the unofficial 10-handed final table, Loosli wore dark shades and had his hoodie pulled over his head, which can be a look that will turn off many fans. When asked about how his background in high-stakes cash games and regularly playing for lots of money worked in his favor, Loosli responded, "I was completely detached. I really didn't feel any pressure." He was then asked about his end-game strategy, to which Loosli answered, "If we're down to two players, I think against any guy I will be very confident." Loosli also pointed out in a recent interview that a friend of his had mentioned he was one of the top five heads-up French players.

Here is Loosli's complete November Nine interview with our very own Kristy Arnett:

To review the 2013 WSOP Main Event live coverage, be sure to check out the tournament page in our live reporting blog. As always, follow PokerNetwork on Twitter and Facebook for all your latest poker news. 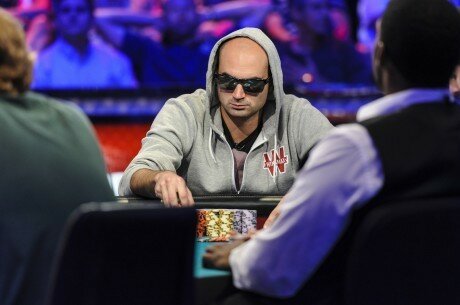