In this week’s edition of Inside Gaming, New York Governor Andrew Cuomo signs legislation to expand casino gambling in the state, Macau gaming revenue is up 20 percent in July, and a UK technology firm combats gambling addiction.

On Tuesday, Gov. Andrew Cuomo signed the “Upstate New York Gambling Economic Development Act,” which will expand casino gambling if a referendum to legalize gambling is approved by voters in November. The bill, which was passed near the end of the state’s legislative session, details development of four upstate casino resorts in regions that don’t have Indian-run gaming centers already. The regions include the Hudson Valley-Catskill area, the Capital District-Saratoga area, and the Central-Southern Tier.

There will be no casino gambling on Broadway – at least not yet – as the bill excludes New York City, Long Island, Westchester, and Rockland from consideration for a minimum of seven years.

“Our focus has been to bring jobs and boost local economies in Upstate New York, where decades of decline have taken their toll in our communities,” Cuomo said in a press release. “This new law will bring the state one step closer to establishing world-class destination gaming resorts that will attract tourists to Upstate New York and support thousands of good paying jobs as well as new revenue for local businesses.”

Regardless of the casino vote this fall, the law allows Nassau and Suffolk counties to open one video-slot facility each. The facilities can host a maximum of 1,000 machines, and will be operated by off-track betting corporations that are already present in the counties. Neither county has designated an area to construct, but Off-Track Betting Corporation President Joseph Cairo told Newsday that they are discussing the OTB Race Palace in Plainview.

“This legislation will provide residents who now travel out of the county to recreate in gaming the opportunity to spend their money in their home county while bolstering educational and municipal services,” Nassau County Executive Edward Mangano offered in a statement.

In an editorial piece for Newsday, Paul Davies disagrees with the idea of casino expansion in the Empire State. He believes that the social and economic costs outweigh the projected benefits.

“The governor has said the move is all about jobs, jobs, jobs,” he writes. “To be sure, casinos will create jobs. But the large-scale expansion of gambling across the state is a zero-sum game.”

The citizens of the state of New York will ultimately make the decision this November as to whether or not casino gambling will expand in the coming years.

Like a well-oiled machine, casino gaming continues to grow on the tiny island of Macau. On Thursday, the Macau Gaming Inspection and Coordination Bureau released revenue data from the month of July, and the numbers are once again up. With roughly $3.5 billion in revenue last month, Macau is up 20 percent from June. With about $25.5 billion in revenue in 2013, the island is up 15% from this point last year.

Even with China’s economy weakening, Macau has weathered the storm. Tourism is still booming in the southern rim, which includes Hong Kong Disneyland and the tropical Hainan Island. Las Vegas Sands board director and Ader Investment Management chief investment officer Jason Ader is confident that, even when the economy is down, mainland China can sustain this growth rate.

“The business is coming from Hong Kong and the mainland – mainly Shenzhen – and you have all this new infrastructure that’s going to facilitate more of them coming,” he told Forbes. “Hard to believe that a country with over a billion people cannot produce those kinds of numbers.”

The infrastructures that Ader alluded to include a high-speed railway linking Macau to the mainland and a bridge from Hong Kong, where travelers currently need to take a ferryboat. Ader also adds that daily table revenue in Macau is between 10 to 20 times more than in Las Vegas, and then Sin City represents just 10 percent of his business now.

“We’re a company with around four billion in profits, but it is all coming from Asia,” Ader says. “And most of it is Macau.”

For more, head to Forbes.com

University of Cambridge vs. Gambling Addiction

Featurespace, a corporate version of a University of Cambridge engineering department project, has created a machine to identify human patterns indicative of problem gambling. Britain’s gambling industry is booming, roughly 4.3 percent of iPhone users in the UK are using at least one sports betting app, and the individuals on the project want to combat problem gaming.

Gaming sites collect data from their customers, including the time of day, frequency, bet size, and the types of games played. In analyzing this, Featurespace can determine what the average individual does and compare it with an erratic or uncharacteristically risky individual.

The company was initially a consultancy, focusing their attention on fraud-detection, and because of their previous work they decided to make the switch.

“It was looking at one aspect of fraud – first party fraud – which is where a customer will charge back a transaction and say ‘well I didn’t make that,’ thought sometimes they actually did make that transaction but they may have been spending a lot more than they wanted to,” David Excell, co-founder and CTO told The Guardian. “We decided to start looking at the protections in place for customers at the moment to stop this kind of thing from happening. How can we use some of that [data] to try and understand the player from a corporate social responsibility point of view, to understand is that player in control?”

Excell hypothesizes that players are in control of their gambling when their gaming patterns are relatively regular. Each player has a different “regular” playing pattern, so play will only be deemed erratic when they are making rash decisions or playing at random times of the day. Excell also admits that the same betting pattern seen in two individuals could mean two completely different things, making context that much more important.

Identifying problem gambling isn’t simply a moral cause either — it can be commercially beneficial as well. The worst-case scenario for a company is to have a player self-ban themselves from placing bets on their site after a short burst of risky plays. Healthy, long-term activity is much more beneficial for the companies than small bursts of erratic, unsustainable action.

“There’s also brand reputation for the operator,” Excell adds. “No company wants to be named in a case study of extreme gambling addiction.

Whether it’s to tackle a physiological issue, provide a steady revenue stream, or do both, Featurespace plans to continue to work with the gaming companies and consult them on problem gambling.

The Guardian has more. 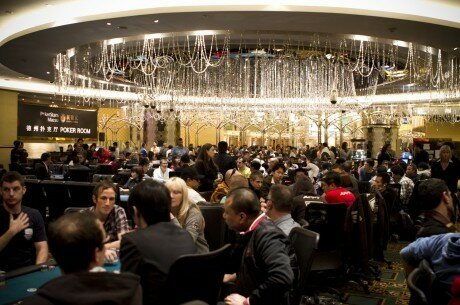