Over the past week, PokerNews has taken a brief look at each member of the 2013 World Series of Poker November Nine. We’ve been moving around the table in seat order, and here’s a quick recap of the players we’ve covered thus far (click each to see their article):

Second time is the charm for 28-year-old Jay Farber. That’s because it took just two tries for the Las Vegas VIP Host originally from Doylestown, Penn., to make the November Nine. He failed to cash in his first attempt last year, but this year he sits fourth in chips at the final table.

Farber is a bit of a wild card, and that’s because poker is simply a hobby for the UC Santa Barbara business graduate. The $733,224 he’s guaranteed for making the November Nine marks his first-ever WSOP cash, while the only other results on his poker résumé are 12th- and 14th-place finishes in 2010 Deep Stack Extravaganza events for a combined $2,155.

“It’s funny. I kind of fell out of poker,” said Farber, who learned to play poker with his friends. “When I first moved to Vegas I wanted to play professionally. I was playing a lot of cash games and I ended up just getting a job working in nightlife and that kind of took up all of my time. Now, finally, I’ve made it to a point where I can take enough time off to play the Main Event ... and I just happened to get really lucky to be where I’m at now.”

Farber’s low profile, at least in the poker world, could very well prove beneficial come November. While there’s plenty of information to study on players like JC Tran and David Benefield, the other players may not find much on Farber. Combine that with the fact that Farber is in one of the better positions at the final table with all of the other big stacks to his right and short stacks to his left, and he has a good chance of surprising a lot of people. Don’t tell that to top pros like Vanessa Selbst, Ben Lamb and Chance Kornuth though, because they obviously have faith in the man they met in the Vegas clubs as they were all cheering him on in the days leading up to the final table.

Speaking of the days leading up to the final table, Farber was the only finalist to finish his starting flight with a six-figure stack (104,400). His run-good continued all the way through Day 5, which was the first time he found himself with an average stack! In the first hand on Day 6, Farber got off to a great start when he played a big pot against well-known pro Noah Schwartz. In the hand, which was one of the more memorable of the Main Event, Schwartz opened to 110,000 from middle position only to have Farber, who was on his direct left, three-bet to 265,000. Schwartz responded with a four-bet to 580,000 and Farber tanked for about 30 seconds before five-betting to 1.29 million. Schwartz moved all in and Farber snap-called off for 3.025 million. Schwartz tabled the

and was clearly distraught to see Farber roll over the

and Farber was well on his way to the November Nine.

For more on Farber, be sure to watch the interview he did with our very own Sarah Grant:

To review the 2013 WSOP Main Event live coverage, be sure to check out the tournament page in our live reporting blog. As always, get all the latest PokerNews updates on your social media outlets. Follow us on Twitter and find us on Facebook! 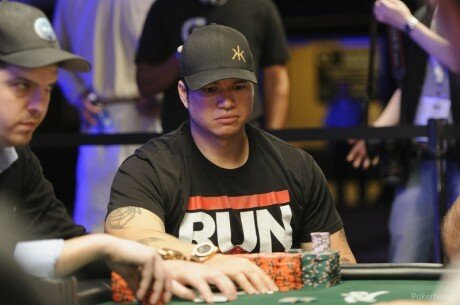